Lungs are a pair of large rubbery organs Lungs which are positioned in the chest, well protected by the rib cage. Their function is to take in oxygen needed for respiration and to pass out waste carbon dioxide and water vapours from the body.

The oxygen comes from the air breathed in through the trachea. The trachea divides into bronchi and these divide into bronchioles. The bronchioles end into tiny air sacs called alveoli, which number more than 300 millions. 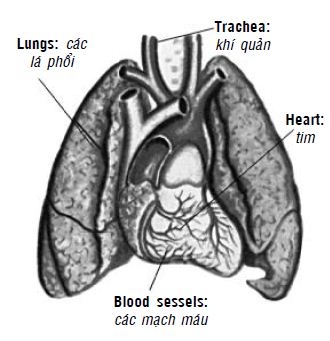 A big blood vessel from the heart known as pulmonary artery divides into two branches, each going to one of the lungs. Here they divide again and again until they become tiny blood vessels called capillaries. The oxygen breathed into the alveoli passes through the thin alveoli walls and enters the capillaries from the heart.

Once this exchange of oxygen for carbon dioxide has taken place, the bright red oxygen laden blood goes into the pulmonary veins and back to the heart to be pumped around the body.