How does our nose work?

In addition to giving us a sense of smell, the nose performs other important functions also. Behind the nose is a nasal cavity which connects it to the back of the mouth.

When we breathe in through the nostrils, the air swirls around in the nasal cavity and is warmed, so it is at body temperature when it reaches the lungs. 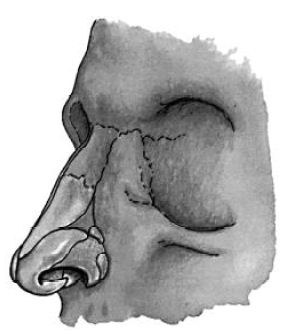 Hair in the nostril filter out any large objects we might breathe in, while smaller debris are trapped on the sticky membranes lining the nasal cavity.

The film of moisture along with the debris, is pushed to the back of the throat by small beating hair, where it is swallowed to make it harmless. On breathing dusty air, the amount of trapped dirt can be seen on blowing the nose.

The membrane in the top of the nasal cavity contains groups of sensory cells which can number upto 10 millions and react with substances in the air. These cells can differentiate different types of smell.

They pass messages to the brain, which can identify the individual cell and hence, the substance it has reacted with.